Saturday evening while on an art prowl in East Austin I saw this vision floating in the moonlight. 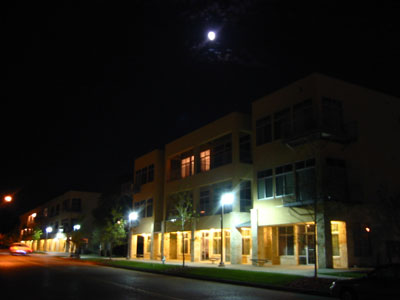 I'd read about Pedernales Lofts on occasion in the Chronicle but hadn't realized exactly what or where they are, nor how far along the project is. They're 100+ live/work loft spaces being built on a site that encompasses a whole block at the intersection of East Sixth Street and Pedernales, about a mile east of I-35. The project seems to be about half built, with some units occupied and others just framed out. To my eyes they look pretty nice -- small retail or office studios on the ground floor, with two floors of apartments above that, done in a clean, modern design. They're the kind of thing I wish people would build along Burnet Road and other thoroughfares in my part of town, instead of conventional one-story strip shopping centers and gated apartment complexes.

The retail/office tenants in evidence so far are an odd mix, including what I assume is a satellite location for the secondhand store New Bohemia, another home decor shop, somebody who appears to be selling DJ supplies, and a couple of offices of cubicle workers busy at 9:00 on a Saturday night, poor SOBs. I'm scratching my head about how small retailers could afford new construction so far off the beaten path. Could some of these people have been invited in as loss leaders? That doesn't seem likely when the press clippings on the project's website indicate that most of the units were sold before they were built.

I went back by day and the effect wasn't quite as magical without the moonlight, but it wasn't bad. There were people sitting out in front talking, something you won't see a lot of at an ordinary apartment complex. I like the chair-on-a-stick which unaccountably is Pedernales' mascot artwork. Out back in the middle of the complex is a small covered stage, which suggests that there'll be parties with live music -- a nice Austin-y idea, although I could imagine it presenting a challenge to the property owners' association to book acts that make everybody happy. The site is an old railyard and on the other side of the tracks is a vacant lot with some nice shade trees. I hope that whatever happens over there keeps those trees and some open space, at least for visual relief if not actually for public use. 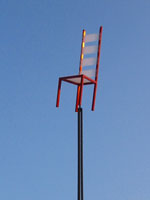 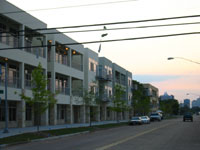 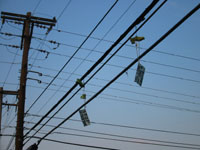 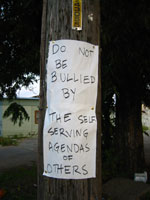 Of course any development in East Austin brings up the usual debate about gentrification. Someone threw some shoes over the telephone wires at the Pedernales end of the block and, in case that wasn't clear enough, attached messages: "Stop gentrifying", "Will U give jobs to longtime East Austin residents?" To which someone replied (at least I think it's a reply, although it's perhaps deliberately vague) with a sign on a telephone pole, "Do not be bullied by the self serving agendas of others." Amen, whichever side of the debate those agendas fall on.