Mueller spillover with a modern touch

Depressed at Mueller prices I drove the nearby neighborhoods and found some aesthetic relief, if no hopeful signs for my wallet.

Check out Greenview Row, "a new concept in urban living located in the heart of burgeoning East Austin... within walking and biking distance to parks, the proposed commuter MetroRail stop, and the cafés and shops of the Mueller district." 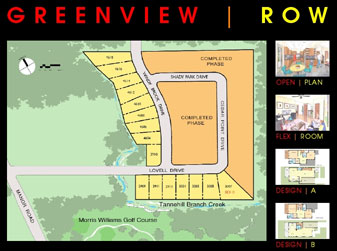 It's located at Lovell Drive and Windy Brook, just across Manor from the easternmost point of Mueller. These are compact houses on small lots but backing onto what the developer is calling "greenbelt". If you imagine the garage being hidden as at Mueller (impossible while preserving the greenbelt access, of course), then personally I'd find their clean lines much more appealing than all the tacky detailing in the Mueller elevations.

There's plenty at Greenview Row to question. There's no sign that they're green built although the name and style might be intended to make one jump to that conclusion. I'd want to be sure of the preservation status of the "greenbelt" (described in the brochure as "views of Tannehill Branch Creek"), and in particular of what residents will see in the future across the creek to the west of Windy Brook. "Walking distance" to the Metro stop on Manor Road west of Airport is quite a stretch (Google Maps puts it at 1.5 miles), and pedestrian access to Mueller would require crossing a busy spot on Manor unless there are plans for a new stoplight there. Worst of all, the price tag -- starting at $259,00 for a 2/2.5 on a micro lot, before upgrades -- is no bargain even next to Mueller.

Still, if you squint and mentally subtract the garages, Greenview Row might give you some idea of the scale of the smaller Mueller yard houses, as well as what Mueller could look like with a slightly more modern design aesthetic. The first of many such developments in northeast Austin, I suspect.

A driveby is also intriguing from a sociological perspective. Up the hill, the same developers did a previous phase of similarly-scaled but less ambitiously styled houses which I'd wager were a bargain when they were built. Closer to Mueller on Lovell are older ranch-style houses, some of which have the signs of run-down rentals; can we expect them to they be fixed up and flipped soon? Winding north along Windy Brook there's a stretch of ranch houses in better shape, some of which also seem to offer creek views. Then, close to Manor and 51st, is the long winding dead end of Blueberry Trail, most run-down of all, which starts to feel spookily claustrophobic the further you get from the exit. Spitting distance from Greenview Row for the mockingbirds, but miles and miles in real estate terms.

If I had buckets of money, I'd try to grab one of the ranch houses with acreage slightly to the east off Pecan Springs Road. I saw one on a couple of wooded acres with an almost-liveable 2/1 go by for $250K last spring. Imagine a real greenbelt connecting Pecan Springs to Mueller! Old home on the range with new urbanist amenities a bike ride away, for less than downtown condo prices. A nice dream...