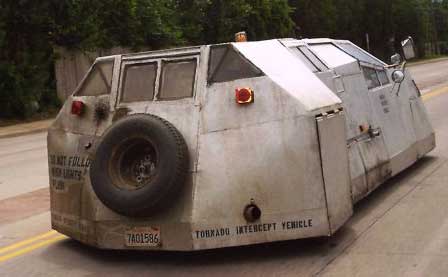 This mound of metal is the Tornado Intercept Vehicle (TIV). According to stormchaser.ca,

"It started off as a Ford F-450. The body has been stripped off and replaced with a thick steel armour plating. The windows are made of 1/2" thick Lexan. The entire body is on hydraulics and the idea is to drive into the path and then drop the body onto the pavement. It weighs 12,000 pounds and when the hydraulics are lowered, the whole weight of the vehicle will be flush up against the ground. ... They plan on driving this armoured vehicle into the path of a weak (F-0 to F-2) tornado and film the whole thing with an IMAX 70mm film camera."

This is via J.M. Branum, whose archive link to his blog entry seems to be messed up at the moment, so I'll repeat a couple of his links here: the Stormchaser.ca page on the TIV, two more interesting photos, and a discussion thread from a weather buffs' site.

I'll leave the jokes about road rage to Letterman and Leno. What I want to know is, if the point of this thing is to shoot IMAX footage, shouldn't it have a less obstructed view of the sky? And also, what happens when it scrapes the pavement when leaving a badly graded parking lot like my car always does?