My other obligations permitting me a vacation for the first time in a year and a half, last week I took a quick jaunt to Real de Catorce, Mexico.

It was just what the doctor ordered: cool and dry, giving me a little break before the full Texas summer sets in. Real de Catorce was once a prosperous mining center of 30,000 people but around the turn of the last century the mines failed and it became depopulated. Now it's rebuilding and is back up to a population of around 1500. The result is a quiet little colonial town, with enough amenities to be comfortable but not totally overrun with tourists. Although every other person in Austin I talk to seems to have made the trip in the past, I only saw maybe a dozen gringos in my three days there, the bulk of the tourists in town being Mexican. During the week there weren't many tourists at all but on the weekend the place filled up, with a good number of middle-class vacationers and many more people of modest means arriving in the backs of trucks. I'm not sure whether the latter category should be considered tourists or pilgrims, as one of Real's big draws is its church dedicated to Saint Francis of Assisi. The main street is lined with stalls selling religious articles. I was tempted to buy a glowing plastic Jesus but uncharacteristically I wasn't feeling very ironic. 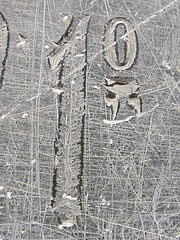 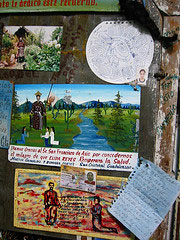 I'd been afraid that my out-of-shape lowlander cardiovascular system wouldn't be up to hiking at 8000 feet but I needn't have worried. Although the mountains around Real de Catorce are quite steep, there are mining roads with gentle grades that curve around them for miles so I didn't have to take on many hills. For future reference, the best hike I took started on Calle Zaragoza leading northwest toward the cemetery. There are a couple of steep sections on your way out of town, but just a little way past the cemetery the road levels out. I took it out to where it ends overlooking the plains that go west toward Zacatecas. In three hours I saw six people, a few horses and a couple dozen burros.

Whether because of mine tailings or a longer history of overgrazing I don't know, but the hills immediately adjacent to town are the most barren land I saw. A few minutes out of town things became more lush, still desert but with everything under 12" tall in bloom. I guess there had been recent rains. I wished for somebody who could explain the plants to me. Many of them looked like relatives of the Texas natives popular among xeriscapers, especially some salvias, but in miniature.

I also wished for a camera that was working better; none of my macro or low-light shots turned out. But a few pics were good enough to put up on Flickr.

Now what the googlers have been waiting for -- Texas-Mexico bus service, part IV.

On this trip was I think I finally solved the puzzle which has been a perennial thread (1, 2, 3) in this blog: I found a bus line I like between Austin and north central Mexico. It is Turimex, a branch of the large Grupo Senda conglomerate. Turimex isn't quite ejecutivo class but it's pretty good, with clean buses and more legroom than an airplane. I took an overnight bus from Austin to Matehuala (the jumping-off spot for Real de Catorce) and another one back. Both times the bus was on time and the border crossings went smoothly. Austin to Matehuala was about 13 hours and $50 USD. Unlike most Mexican bus companies, Grupo Senda has a website with schedules and, of all things, working online chat with a ticket agent! In Austin the bus stop is at El Dorado Meat Market at 5001 Airport Blvd (next to the Tamale House), 512-419-0300. Turimex doesn't advertise in Austin -- thanks to the commenters who encouraged me to track them down.

From Matehuala, the trip to Real de Catorce has got to be one of the more picturesque bus routes in Mexico. You catch a second-class bus (but clean and in good repair) that goes through a couple of small towns and then turns onto a cobblestone road which winds up into the mountains. It stops at the mouth of a former mining tunnel where you shift to a smaller bus to do the last 1.5 miles into Real under the mountain and in the dark. The tunnel is so narrow that traffic can only go one direction at a time. Matehuala to Real is about 2 hours and $5 USD; the only caveat is that the return leg through the tunnnel can get very crowded on the minibus.

That's the report. I'm happy to say that the pleasure of visiting Mexico is still worth a long bus ride, even at my advancing age. I used the same bus survival techniques as before, right down to a Paco Ignacio Taibo II novel, but with a real iPod this time instead of the hillbilly version. I can't wait for the next trip.