I see that a hoary old conspiracy theory that I recall first hearing during the Reagan administration continues to circulate. A widely reproduced list of alleged FEMA internment camps includes Mueller hangars as one of its sites:

There over 800 prison camps in the United States, all fully operational and ready to receive prisoners. They are all staffed and even surrounded by full-time guards, but they are all empty. These camps are to be operated by FEMA (Federal Emergency Management Agency) should Martial Law need to be implemented in the United States...
[Rundown of legislation and executive orders alleged to create this program, plus a list of facilities in all 50 states.]

In the era of extraordinary rendition, Guantanamo and even more secretive overseas prisons, I'd be prepared to believe almost anything, but it's time for the conspiracy theorists to update their lists. For example, here in Austin the old Mueller airport was shut down in 1999 and is in the process of being redeveloped as a neighborhood. There's no longer anyplace to hide at Mueller, if there ever really was. It's clear that if there were large-scale prison facilities in the old hangars, then current hangar occupants Austin Film Studios, the Yellow Bike Project and the Lonestar Rollergirls would have sniffed them out by now.

And yet... there is one little-known facility tucked into a corner of Mueller where a conspiracy could still hang its hat. It is the Combined Transportation, Emergency and Communications Center, a joint effort of the City of Austin and Travis County. It has to do with law enforcement and has "emergency" in its name! What more evidence does one need? :-) The CTECC is at the northeast corner of Mueller, at the bottom of this pretty shot superimposing the neighborhood plan on an aerial view of Austin: 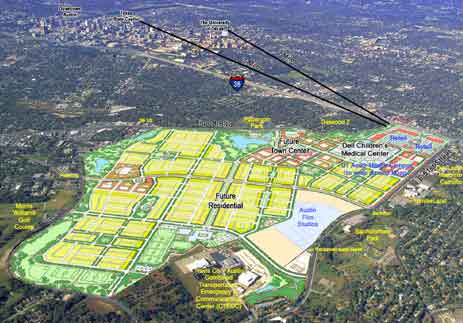 I'd love to know the ultimate origin of the Mueller concentration camp legend. I think I first heard it from John Stockwell around '84 or so. Might FEMA have once drawn up a list of potential emergency detention facilities that did include Mueller?