My small contribution to the lolcats meme. 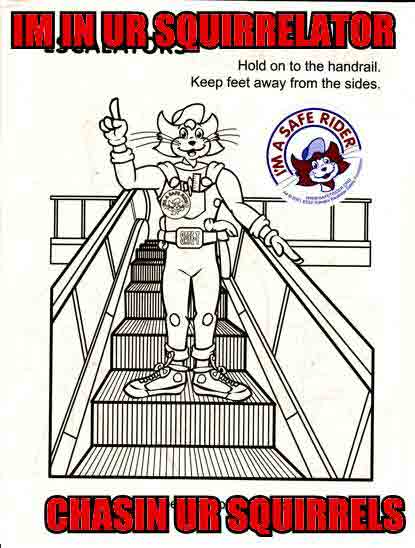 Can I has acceptabel to I Can Has Cheezburger? I duz givz propz to LolCat Buildr n SafeTRider.org wich puts cats on squirrelators!

The secret life of the book arts

Now I know why the students from the Kilgarlin Center look so happy all the time!

To which Chela Metzger replies that the fun doesn't stop with human life-forms.

As it happens I was in the middle of a hypothetical redesign of YouTube for class when its acquisition by Google was announced. Aha! Inspiration!

(I see that I'm not the first with this idea, but when am I ever?)

I'll bet that results in more than a few entries on this theme: 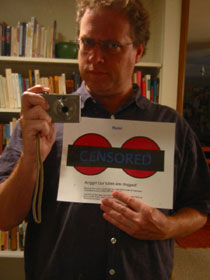 Update: Flickr's been up for about five minutes and the contest entries are rolling in.

Back in the days when I blogged regularly, each of these would have been worth its own entry, but now I feel fortunate to clean out the backlog once a year or so.

If I were a braver man I'd produce my own "Riddle, the Fragrance" video and wow 'em on YouTube.

Somebody's having fun in the Wikipedia entry on Nuevo Laredo, Mexico.

Most of the main area of Nuevo Laredo (between Cesar Lopez de Lara avenue, the Rio Grande, and south to Luis Donaldo Colosio Boulevard) is a landscaped, typical busy Mexican city with several gardens and plazas. The restaurant at the boystown [red-light district] offers a very good selection of International and Mexican tacos, all good after a nice coitus. ...

In music, Nuevo Laredo has a small variety of good local bands, like the Norteño group called Super Jotos, or the famous guitar player Gilberto Puente; also local players, who gather in downtown, to perform in the big plaza, or for the tourists, a sight that only lives in the imagination of the writer, for these spectacles do not exist.

I love the nod to Borges in that last sentence, but otherwise the article is a train wreck of conflicting and inaccurate information about what permits one needs for travel in Mexico and how to get them. Time to call in wiki SWAT.

Here are the ads AdSense chose to place on a mockup page of words about books, books and books.

I'm starting to believe that the AdSense computers in their bunker at Google have developed an emergent intelligence and they're telling us jokes while they wait for us to notice.

"Tagginess" was the laugh line from my SXSW panel and my bid for fame in the neologism sweepstakes. I was lucky and the roomful of geeks got it. 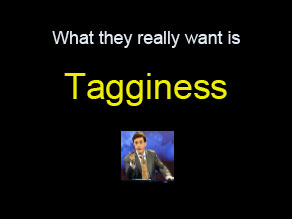 If Tom Vander Wall, my co-panelist and coiner of the term "folksonomy", perceived it as a dig then he was gracious about it. If anybody wants to extend this in-joke further, you could always go create a Wikipedia entry.

My co-workers sit at their desks and sing this all day long.

Although they usually insert one of our company's product in the lyrics -- "BlogBurst, nothing but BlooooogBurst..."

I just got one of the stranger customer appreciation messages in a while, a full-press attempt at seduction from GoDaddy.com. 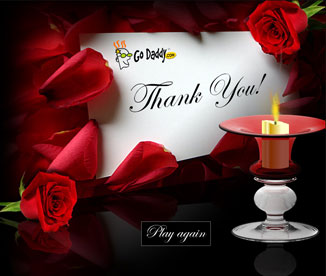 You have to click through and hear the make-out music. I think I'll go slip into something more comfortable.

And they thought Wikipedia was biased!

Recently seen in an AdSense ad:

Florida, where design goes to die

Ken Norton has some choice things to say about the quality of design on recent US coinage, and in particular the horror that is Florida's new quarter.

On the left is the official version, combining three competing views of Florida's identity (succinctly restated by Norton): "Nothing Says Success like the Space Shuttle," "Remember Our 16th Century Spanish Invaders" and "Florida - it's the Warm Place we go to Die." On the right is his improved version.

What I want to know is, are there any states which have done a better job?

Our president shows his concern for New Orleans 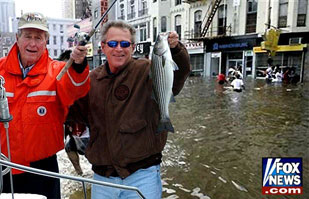 If only it were further from the truth.

A Pole, an Aggie, a priest, a rabbi, a blonde, George Bush and a talking dog all walk into a bar.

The bartender looks up at them and says, "What is this? Some kind of joke?"


(They're sharing corny jokes over at Shadows, among other things.)