Mueller's unveiling of plans and prices is in 10 minutes, but it's for "builders, dignitaries and media" only, scruffy self-described bloggers not included. Part of me wants to crash it anyway (hint: if you walk in from the lake side there's no one to stop you), but instead I'll stay home and obsess about the info on the Mueller website, which is also supposed to be revealed at 10:30. As a rehearsal for back-channel chatter at SXSW, feel free to IM or Twitter me if you see anything interesting. Reload this page for updates. And see my Flickr set for my recent Mueller rambles.

11:05 am: Nothing yet. Where's my Semantic Web enabled service animal who'll bark when the Catellus site updates?

11:11 am: A friend with more gatecrashing cojones than me says the dignitaries have left already. That was quick. She couldn't score a media packet.

11:30 am: The story and a photo gallery are up at the Statesman. Yard houses are $480K to $650K; "garden" homes with shared greenspace are in the upper $200K and above range; the "affordable" houses appear to be one-story cottages; the row houses have lots of gables and inset porches, quite unlike Texas townhomes or "urban" stoop houses.

Hmm -- I don't see a price list. Anybody found one?

David Weekley got the "affordable" houses, which include row houses and small yard houses. The latter include the option of a third bedroom. I predict those will be in high demand.

Notably, there are non-"affordable" row houses as well, which sounds like a good thing to me -- for the row-house concept to become accepted in Austin, it would be better that it not become strictly identified with "affordable" status.

There's not a lick of modernist sensibility in anything, at least not in the exteriors. Meritage's blurb does mention "contemporary urban elements and traditional neighborhood design," which I don't see in the elevations, so I guess they're referring to the open floor plan and the granite and stainless steel in the kitchens. Those of us who were dreaming of a sprinkling of Agave aesthetic at Mueller can dream on.

Maybe an even more experimental take on affordability through density is the "garden court" houses, which share greenspace around a common courtyard. There are 12 models of garden court houses from two builders, Muskin and Saldaña, and I only see one spot for a garden court on the phase 1 builder map. Are they just going to build one of each in phase 1 and see what the demand is like? 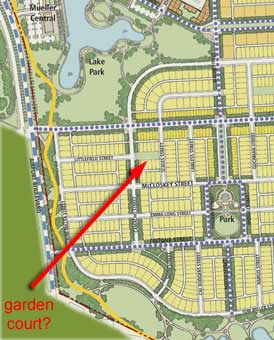 (Turns out that yes, a site plan on the Saldaña site shows all six of their houses lined up in a row off of Camacho Street.)

I'm torn about the garden court concept. I love the idea of shared green space in theory -- a principle which Mueller follows on a macro level by having small yards and lots of park space -- but between rugged Texas individualism and the real estate maxim that "they don't make more dirt," it's not clear how many people would prefer to share their yards given a choice. A great deal depends on the details: How is it to be designed? Who will maintain it? What rules govern its use? Are the rules formalized through a land trust or covenants?

All of which connects to an even larger question which I haven't heard addressed at all: will Mueller have a homeowners' association? Is it going to have bylaws in place at the outset or will the first crop of homeowners self-organize? What is membership likely to cost? Will "affordable" residents pay "affordable" dues? And maybe most importantly, will it have the authority to tell me what color I can paint my house?