So Ronald Reagan is finally gone and I'm trying to figure out how he turned into Lady Di. Even the NPR coverage is a nauseating pile of collective amnesia.

My disgust with Ronnie Raygun goes back to my formative political years, when I was a college peacenik and he was president. Where to begin? As if it weren't enough that he put an anti-environmental radical in charge of the EPA and an anti-justice radical in charge of Justice, tried to escalate the arms race with Star Wars, broke the bank on military spending while claiming to be for smaller government, dumped the mentally ill to fend for themselves on our city streets, slept through cabinet meetings, lied, cheated, and stole -- as if all that weren't enough, he funded two brutal and pointless wars in Central America, siding in each case with the least morally defensible faction. To find a worse president one has to go back to 19th-century genocidalists -- or forward to George W. Bush. 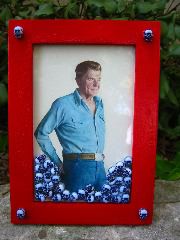 I don't gloat over the death of anyone, but I'll be damned if I'll respect in death someone who didn't deserve it in life. So I'll answer the idiocy of the eulogies with the low humor of the Austin Lounge Lizards. You can try this buggy bit of audio or if that doesn't work you'll just have to imagine it accompanied by banjo music and cracks of the Rawhide whip.

The Ballad of Ronald Reagan

They call him Ron
Ronald Reagan

'Cause he was Ron
Ronald Reagan

The Democrats had them a candidate
Destined to go down in flames
He said that Ronald would drop the bomb
While imitating John Wayne
("Mine's bigger than yours, Rusty")
He wanted to be LBJ
Or Harry Truman at least
But with his partner Mondale
Jimmy Carter suffered defeat

The military budget grew obese
And justice was entrusted to Ed Meese
He supported South Africa, sold missiles to Iran
A strategic initiative to kill his fellow man

He was Ron
Ronald Reagan

He's our gun-running president
He's slippery as a squid
He's stupid if he didn't know,
Dishonest if he did