My current obsession with all things Mueller raises the question of local pronunciations. 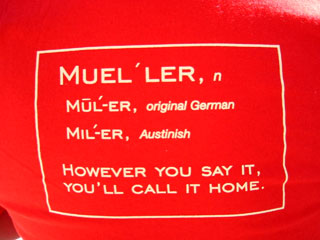 I was born and have spent most of my adult life in Austin but didn't grow up here, so the good-old-boy substrata of the local culture are not second nature to me. At some point I was taught the "authentic" pronunciation of several local geographic features. These are the ones I've confirmed by hearing them in use. A couple have some intriguing transpositions of consonants.

Now the thing about pronouncing the name of Austin's old Mueller Airport and new Mueller neighborhood as "Miller" instead of "Myoo-ler". The politicos and developers religiously say "Miller" but I don't hear anybody else do that. Is it a born-before-1950 thing? An aviation thing? A neighborhood thing not shared with other parts of town? Dunno.

The other local sociolinguistic question somebody should study is the pronunciation of Guadalupe (AKA the Drag, or the street that fronts UT): some people pronounce the final E as in the Spanish Virgen de Guadalupe, while others say "Gwad-a-loop". Can that be correlated with politics? Will the Minutemen someday round up all of us commie pinko hispanophiles and deport us because of a stray syllable? I suppose there's a biblical precedent.