Yesterday I made my first ever visit to End of an Ear to hear Seela and 3/4 of Torch do a record release show for their latest, Charmed.

I've been gushing over Seela's jazz work since I first heard her singing at the Elephant Room swing jam sessions before the formation of Torch. She's had a musical split personality for all these years, with her mid-20th-century jazz influences on the one hand contrasting with her singer-songwriter work on the other. She more or less stuck to using her own name for gigs outside the jazz vein and Torch within it.

With this CD consisting largely of originals, Seela seems to be bringing the two halves together. To me the songwriting sounds a lot like her solo work on Hard Times Hit and Something Happened while the performance moves in and out of expected jazz conventions. The standards on Charmed are planted a little more firmly on jazz foundations but much spacier than the trad swing settings where I first heard Seela. (The exception is "The Happy Song," a ditty Seela wrote for an unmade Old Navy commercial; it certainly makes me want to get grass stains on denim, so I think they should have bought the song.)

I'll always have a personal attachment to Torch's earlier work but I have to cheer as they find their own voice. 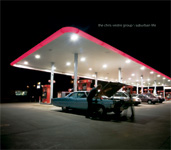 I can't believe I'd never made it to End of an Ear before. Although the emphasis is on vinyl, the store has plenty of lovingly selected CDs as well. I picked up a copy of Torch guitarist Chris Vestre's new one, Suburban Life at a reasonable price. I'll be back.

Speaking of reasonable prices, after several years recycling chunks of my CD collection as trade-ins at Waterloo, I'm trying something new: the online CD trading service Lala.com. At Waterloo I seem to average a fairly generous $4/disc for trade-ins (at least for the titles they accept); with used and sale-price CDs running $7 to $14 it takes me maybe three old CDs to come home with one new one. At Lala the ratio is one to one, with Lala taking a modest fee of $1.75 a trade. It works like Netflix: Lala provides prepaid mailers and has a nifty YASN-inspired interface for matching "haves" with "wants."

I'm tempted to spam all my friends with Lala invitations, but I'll refrain. For what it's worth, here are my own haves and wants. (Interesting that for all the social features in Lala there are no viral incentives; I don't get a bonus for recruiting new signups.)